A few days ago The Ringer wrote an awesome article chronicling the origin of the Backyard Baseball franchise. What started as a game with no professional cameos and only one playable field turned into a cult classic that was a pivotal part of my childhood. Not only was the game play unlike any sports game of its time, but the game brought my friends and I closer together. Just about everyone in my neighborhood, including a young Dubs, had a team on my computer. And whether you took it seriously or named yourself something sophomoric like “Coach Poopie,” we all had a love for Backyard Baseball that few other games have been able to recreate in my life.

Now, most people probably played for fun and used the game as an their alotted daily computer time. But in my house there was a level of intensity that proved you were the real deal. Every team generated on my computer had a random team name (i.e. Humongous Fishes), random team colors, random home field, and a random roster only consisting of backyard kids. No pros. If you used pros when you played this game, you’re kind of a huge pussy. There’s nothing more demoralizing than being named the Crazy Melonheads with all yellow uniforms, having your home field be Sandy Flats and having your first three picks be Billie Jean Blackwood, Lisa Crockett, and Jorge Garcia.

I can still recall hearing groans of frustration when someone clicked one space away from Pablo Sanchez and ended up with Sidney Weber instead. In fact, if you catch Dubs and me at a bar, there’s a shockingly strong chance we’ll be talking about something like the time Star Moonbeam hit a right hook into the gap that knocked in Lena Ng and cost us a game.

After playing the game for so many hours and having a wealth of player knowledge that is otherwise utterly useless, I figured on this most special of occasions that I’d throw together my perfect lineup. A lineup that I could actually pick with my eyes open, and one with which I’m confident I’d never lose a game. Here it is:

Obvious pick to lead off. You bunt with Pete down the third baseline, steal second and third. If he bunts foul twice, he still has enough ability to hit on line drive. 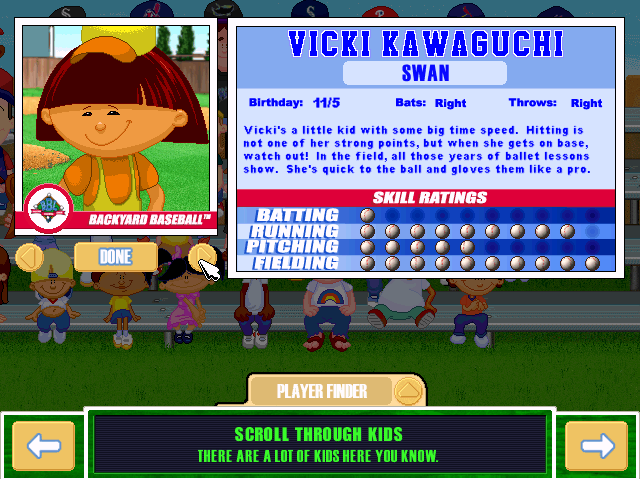 Possibly controversial, but also lightning quick like Pete. Best case scenario Pete is on third with a 1-1 count to Vicki, you tell Pete to steal home and have Vicki bunt for a not so suicide squeeze because everyone will no doubt be safe.

Bottomline, Pablo is too good to not have. I tried to get creative and make an ideal lineup without him in it because I think he’s a liability in the field sometimes being so short, but his raw power can’t be matched. He’d be mashing dingers into the pool in left every home game and that’s a quick 3-0 lead with no outs through three batters.

Kiesha does not get nearly enough love when people recall memories of this game, but she’s the perfect four hitter. If Pablo doesn’t clear the fences, Kiesha almost always does. Can hit for power and is a pretty decent fielder.

Besides having the best walkup music in the game, you gotta love Achmed’s spirit. Always listening to music and never to a word of encouragement I would tell him, he lives in his own world and you need a guy like that. One could argue Achmed Kahn is the original Beats by Dre commercial.

Stephanie and Jocinda Smith are often times wayyyy overrated (especially Jocinda) but Stephanie is solid enough all around to make this team. Will never have the highest average but won’t have the lowest, and she has a cannon from third only bested by Tony Delvecchio.

It was between Kenny Kawaguchi and Mikey T for this spot, but with Achmed catching I needed a power hitting first baseman and Mikey fills that role beautifully. He hits for power and that’s pretty much it. He’s really slow but if you need a lefty pitcher for an inning he can also come in and do that. 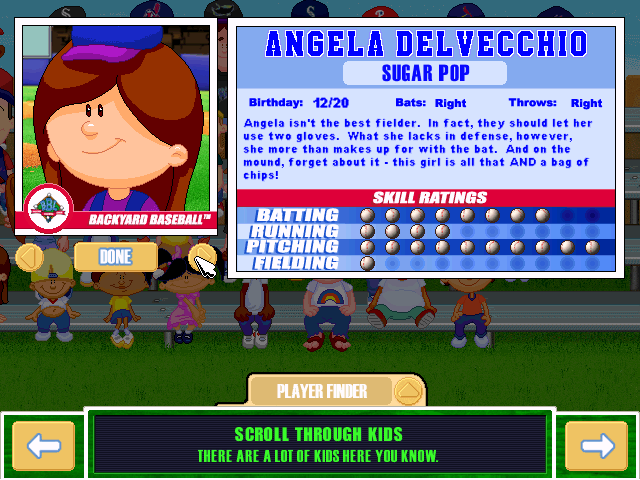 Nobody better than Angela on the bump, flat out. She has the meanest right and left hook in the game and gets a boost when she plays against her brother Tony. Everytime she’s on the hill you know you can get a solid four innings out of her, and you won’t waste her juice on hitting because she’s pretty horrific swinging the bat.

Love the old double leadoff strategy. Having Luanne round out this lineup and having her bunt her way on just sets up the top of the lineup to do their thing. Imagine having Luanne, Pete, and Vicki all on base with Pablo coming up? You may as well just forefit the game.

There it is folks, the definitive perfect Backyard Baseball 2001 team. No doubt in my mind that if there were a mercy rule I would reach it every game by the fourth with that team. Even a team of all Mr. Clanky’s wouldn’t be able to keep that game close. If you think you have a better lineup I’d love to hear it, because I love seeing people be wrong about stuff.